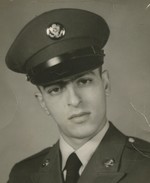 Mr. James Costello, Sr., age 75 of Utica, passed away unexpectedly on Sunday, November 6, 2016 at St. Elizabeth Medical Center.
He was born in Utica on May 2, 1941, a son of the late Frank J., Sr. and Rose (Ciccarelli) Costello. Jim was raised and educated in local schools, where he attended T. R. Proctor High School. Mr. Costello was a proud U. S. Army Veteran. He served during the Vietnam War.
On January 7, 1967, he married the former Margaret A. Dowe in St. Louis Gonzaga Church. Their marriage spanned over forty-nine years, characterized by the true love and commitment they shared with their family and each other.
Upon his honorable discharge from the Army, he began his career with Bossert Manufacturing Company, where he worked for over twenty years; he later accepted a position with the Masonic Care Community. Jim retired in 1993 from Utica Corp., where he was a machine operator. His memberships include the American Legion Utica Post 229, the American Legion Charles H. Adrean D.S.C. Post 625, and the DAV Wheeler Stars and Stripes Chapter 82, where he at one time served as Commander. He volunteered on a regular basis at the Food Bank.
Jim had a great appreciation for Lincoln automobiles, owning many of them throughout the years. A true “Snow Bird” he looked forward to going to his winter home in Florida with his wife. He loved Frank Sinatra and Andrea Bocelli. You could often find Jim smoking a fine cigar. A dedicated and beloved family man, his favorite time was spent with his wife, children and especially his grandchildren. He was happiest when he had his family around him at the many family gatherings.
Surviving are his beloved wife, Margaret; three sons and daughters-in-law, James, Jr. and Joella Costello of Frankfort, Frank J. and Rosemarie Costello of Utica, and Marcus A. and Roxanne Costello of Frankfort; his grandchildren, James Costello and his companion, Chelsy Coveleski, Joseph Costello, John Costello, Miranda Costello and her companion, Edwin Martinez, Frank Costello. Jr. and his companion, Jaconna Brown, Marcella Costello and Michaela Costello; two sisters and brothers-in-law, Violet and Pat LaGatta and Marie and Steve Clarke all of FL; two brothers, John Costello and his companion, Tracy Jones of Frankfort, and Peter Costello of Syracuse; an aunt, Rose Tanzi, and an uncle, Carl Ciccarelli both of Utica. Also surviving are many nieces and nephews, especially acknowledging, Johnny and Brian Costello; great nieces, great nephews, cousins, especially acknowledging, Victor Costello, who was like a brother to him; his in-laws, Lila Atkinson, Albert H. Dowe, Jr., Laurice Gigliotti, Beverly DiGirolamo, Joseph and Suellen Dowe, and Richard and Cheryl Dowe; and many special friends. He was preceded in death by a brother and sister-in-law, Frank J. and Mary Lourdes “Kim” Costello.
In keeping with Mr. Costello’s wishes there will be no public visitation. Relatives and friends are respectfully invited to attend his Mass of Christian Burial, which will be celebrated at 10:00 on Friday morning at St. Mary of Mt. Carmel/Blessed Sacrament Parish.
Arrangements have been entrusted to the Adrean Funeral Service Inc.
The family would like to express their gratitude to the nurses and staff of St. Elizabeth Medical Center’s Emergency Room Department for their valiant efforts the night Jim was brought to the hospital.


Provide comfort for the family by planting a tree in memory of James Costello, please visit our Heartfelt Sympathies Store.