To share your memory on the wall of Mariruth Cardillo, sign in using one of the following options:

To send flowers to the family or plant a tree in memory of Mariruth L. Cardillo (Azzarito), please visit our Heartfelt Sympathies Store.

We encourage you to share your most beloved memories of Mariruth here, so that the family and other loved ones can always see it. You can upload cherished photographs, or share your favorite stories, and can even comment on those shared by others.

Posted May 31, 2020 at 03:44pm
Mare no words could describe how much I'm missing you right now how much I'm thinking of you and not getting a chance to say goodbye I know some people say goodbye is not goodbye but I really wanted to see you one more time I know you're in heaven you are truly an angel here you did things for people loved and cared for them unconditionally and you wouldn't even get a quarter of that back and I know because we talked so many times you even said that my children were your nieces and nephews I love that I will miss you for the rest of my life and I hope that you're running and breathing on your own with your doggie I'm sure she was there to greet you I hope UC Mary Rose and dick please give them a hug and kiss from me nd Dominick as long as I've k own you for what 35 yrs never knew your dads name was same as my sons...their presence will forever be missed as well as yours I love you my sister my friend... I still cant believe your gone;hope your there to greet me as well..until then I will forever miss you....(🙏🙏💔⚘😔🌹🌷🌹⚘🧚🏻‍♂️🧚‍♂️🧚‍♀️💞
Comment Share
Share via:
BS

Posted May 30, 2020 at 09:13am
"There is no death, just a change of worlds." You are now in a better world, the one we are promised. Your faith has gotten you there. Thanks for the memories, Mare
Comment Share
Share via:
CC

Posted May 29, 2020 at 07:32am
A person whom one has a bond, one with mutual affection! I truly loved you MY FRIEND! Till we meet again...sleep with the Angels!

Posted May 28, 2020 at 09:29pm
To the families of Mariruth,
Our sincere sympathy for the loss of a kind and wonderful woman. Many fond memories I hold dear to my heart
over the years. She certainly was a ray of sunshine when we gathered together. So very happy to have
crossed paths with her.
May she rest in the Arms of Our Mighty Lord and Savior, till we meet again.
With Love,
Frank&Mary Guzzardo Annese
Venice, FL
Comment Share
Share via:
MA

Posted May 28, 2020 at 08:37pm
Very sorry to loose another family!!
Unfortunately not really close to my cousin, but still, a cousin.
Michael Azzarito & family 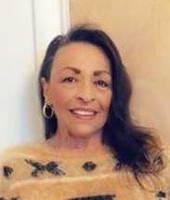