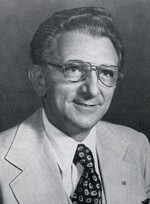 John J. Licastro was born on September 15, 1926, in Queens, NY to Frank and Pauline Licastro. John survived his first wife, Gloria Schwanzer, until her untimely passing in 1981, and subsequently married Laura Amato until her passing in 2018. He raised one child, Paula, and was father In-law to her husband, Steven.
Beloved grandfather to Nicole and Michael (his wife Brianne), and great-grandfather to Steven and Jane.
John was a proud American, serving a tour in the U.S. Navy in the pivotal years of 1944 – 1947. Following his honorable discharge from the service, John went on to become the office manager for Phelps Dodge, and subsequently, Ambassador Mail, from which he retired.
The Right Worshipful, John J Licastro, dutifully served as a 56 ° Mason for nearly seven decades, holding the position of National Secretary Treasurer National League of Masonic Clubs for fifteen years. He actively participated in the Shriners International, Masonic War Veterans and the Grand Lodge Youth Committee. Concurrently, he was a dedicated member of the Plandome Volunteer Fire Department.
In life, John felt a deep connection to family, country, and service. Up until the end, his wit was sharp, and his sense of humor completely intact – which endeared all, from family to friend to caregiver, to him.
He will be both missed and remembered.
Please consider memorial contributions in John’s memory to the Shriners Hospitals for Children, P.O. Box 863765, Orlando, FL 32886 or online at www.lovetotherescue.org.
Mr. Licastro will be laid to rest next to his wife in Calverton National Cemetery with full military honors, on Monday morning, July 6, 2020 at 10:00. Relatives and friends are respectfully invited to attend Mr. Licastro’s Interment Service at the Cemetery. Online condolences are encouraged by the family to be left on the funeral home’s website.
Arrangements have been entrusted to the Adrean Funeral Service, Inc., 700 Rutger Street, Utica, NY.