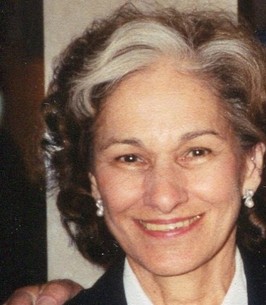 Share this tribute
Memorial Candles Lit for Angela M. Nole | SEE ALL
Light a Candle
"We are honored to provide this Book of Memories to the family."
— Adrean Funeral Service, Inc.
"Angela was one of the most beautiful women we have ever met. She will be missed by all for her loving presence and spirit. May you all have..."
— The Lee family (Ed, Diane and Luke Janicki)
Funeral Details Memory Wall Photos & Videos Send Flowers

Print
Angela Melchiorre Nole, 83, passed away unexpectedly on Friday, October 19, 2018 at St. Elizabeth’s Medical Center. She will always be in the hearts of family and friends who love her.
Angela was born on August 5, 1935, in Utica, the eleventh of thirteen children, to Maria (Salamida) and Angelo Melchiorre. She graduated from T.R. Proctor High School. On June 18, 1955, Angela married
Angelo V. Nole at St. Mary of Mt. Carmel Church. They shared a loving marriage, filled with family and friends, for nearly 60 years prior to Angelo’s death on November 20, 2014. Known for her altruism, reliability, and kindness, Angela helped everyone in need of her assistance. Throughout her life, her family and friends counted on her capable and compassionate care.
Angela was a generous supporter of countless religious, and charitable organizations. She was a longtime parishioner of the former St. Agnes Church. She was also a communicant of Mt. Carmel and Historic Old St. John’s Churches attending mass daily and novenas regularly. Surviving are her daughter and son-in-law, Virginia and Thomas Dosch, Clinton, and her son and daughter-in-law, Angelo, Jr. and Diana Nole, Pittsford. Always close to her heart was the memory of her son, George, who passed away unexpectedly in 1975 at age 17. She leaves her beloved grandchildren, Caitlin (George) Zhushma, Rochester, Christopher Dosch, Denver, and Laura Dosch, Atlanta; her brother, Nunzio Melchiorre, sister, Lucy Segal, sister- in-law, Connie (Nole) Corasanti, brothers-in-law, Joseph Donovan, and Peter Greco; sisters-in-law, Jane Melchiorre, Rosemary Melchiorre; and her many cherished nephews, nieces, and their families, godchildren, cousins, and many lifelong friends. She will be greatly missed. Angela was predeceased by her parents, in-laws, George and Virginia Nole, Guy (Virginia) Melchiorre, Daniel (Ann) Melchiorre, Faustine Melchiorre, Cosmo “Red” Melchiorre, Frank (Anna) Melchiorre, Alfred (Carolyn) Melchiorre, Joseph Melchiorre, Marie Dolores Greco, Angelo Melchiorre, Jr., Orrie Polacelli, Eugene Corasanti, Marie (Nole) Donovan, and Sidney Segal. The family extends a special thanks to the doctors and nurses of the St. Elizabeth Medical Center, emergency room and especially the 3rd floor ICU staff who provided compassionate and professional care to Angela. A Mass of Christian Burial will be held on Saturday, October 27, at 10:00 at St. Mary of Mt. Carmel/Blessed Sacrament Church, Utica. There will be no calling hours. In memory of Angela and in lieu of flowers, please consider support of the George A. Nole Scholarship Fund at Notre Dame High School, Utica, or United Cerebral Palsy of Utica. Envelopes will be available at church.
Arrangements have been entrusted to the Adrean Funeral Service, Inc. 700 Rutger Street Corner of Mohawk Street (at the Matt Funeral Home).


To send flowers to the family of Angela M. Nole, please visit our Heartfelt Sympathies Store.

We encourage you to share any memorable photos or stories about Angela. All tributes placed on and purchased through this memorial website will remain on in perpetuity for future generations.

Angelo,
We are so sorry to hear the passing of your Mother. Our prayers and thoughts are with you and Diana during this difficult time.
Tony and Ernie Gugino
Tony and Ernie Gugino - Sunday November 11, 2018 via Donation
To: The George A. Nole ii Scholarship Fund At Notre Dame High School
Share This:

We are so sorry to have missed the funeral but wanted to make sure that you know how much we thought of your mother. She was always kind, gentle and classy. Please accept our deepest sympathy.
David and Regina Bonacci - Wednesday October 31, 2018 via Donation
To: The George A. Nole ii Scholarship Fund At Notre Dame High School
Share This:

CF
Ginny and Ang....am so sorry to hear of the loss of your mom. She was always so kind and had a ready smile. Though I haven’t seen her in many years, I remember her and your dad fondly and whenever I return to Utica I think of your family. You are in my thoughts.
Cindy Felice - Sunday October 28, 2018 via Condolence Message
Share This:

Angela was one of the most beautiful women we have ever met. She will be missed by all for her loving presence and spirit. May you all have the comfort of God and your strong family bonds to carry you through this difficult time.
The Lee family (Ed, Diane and Luke Janicki) - Saturday October 27, 2018 via Memorial Candle
Share This:

B
Ginny my condolences to you and your family on the loss of your mother. She's looking down on you all with your father at her side with smiles on their faces. May she RIP
Bob Ollerenshaw - Friday October 26, 2018 via Condolence Message
Share This:

PT
Although I have been away from Utica for several years I remember Angela as a person with as soft-spoken, having a perpetual smile and as very kind. I'm sure her family will miss her presence, however, be comforted with the many memories she provided to them throughout her lifetime.

RA
Angelo & Family: So sorry to hear about your mom's passing. She was a wonderful woman. Sending prayers to all the Nole/Melchiorre families.
Rebecca (Simbari) Almstead - Wednesday October 24, 2018 via Condolence Message
Share This:

JM
So very sorry to the entire Nole family. She was a great lady.
Jeanna Marraffa - Wednesday October 24, 2018 via Condolence Message
Share This:

JC
Angela was a kind, gentle woman who came from a large family and married into an equally large clan; the Melchiorres and the Noles all lived in the Kossuth and Catherine neighborhood,an Italian conclave where family and food reigned
supreme. In this world, where everyone looked after each other, Angela embodied these caring
traits which she showered on her family and
friends, uncondtional love. She was special.
Joan Nole Salerno, cousin - Tuesday October 23, 2018 via Condolence Message
Share This:

DT
We were all saddened to hear of Angela's passing. We all loved Angela! May she fly high with the Angels to her final home. May God Bless and Keep her always. RIP Angela.

Provide comfort for the family by sending flowers.