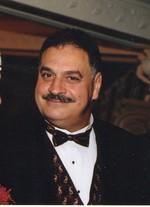 Mr. Richard St. Thomas, age 60, of Taberg, NY passed away unexpectedly, on Sunday, February 26, 2017 at his home.
Born in Rome, NY on February 16, 1957, Richard was the son of the late Salvatore A. and Lillian T. (Franco) St. Thomas. Mr. St. Thomas was raised and educated in Rome, where he attended Rome Free Academy. Richard was a Master Carpenter by trade; At one time, he was a member of the Carpenters Local #120. He lastly held a position with the Justice Center in Utica as an Arbitrator/Mediator. On November 1, 2002, he married the former Doreen M. Melchiorre.
Surviving are his wife, Doreen; a daughter, Skylor St. Thomas of Clinton; a son and daughter-in-law, Richard and Stephanie St. Thomas of Westmoreland; a granddaughter, Emma St. Thomas of PA; a brother and sister-in-law, Peter and Clair St. Thomas of Rome; his mother-in-law, Rosemary Melchiorre of Frankfort; and a brother-in-law, Angelo Melchiorre and his fiancée, Traci Prigoff of GA. Also surviving are several aunts, uncles, nieces, nephews, cousins, and his canine companions, Knuckles, Modoe, Ying, and Yang.
The family would like to thank Richard’s friends, Rocco Garro, Donald Cole, and John Arbus for always being by his side through their many years of friendship; they were especially supportive throughout his illness.
In keeping with Richard’s wishes, there will be no public visitation. Relatives and friends are respectfully invited to attend his Memorial Mass and Celebration of Life, which will be held on Saturday afternoon at 12:30 at the Church of Our Lady of Lourdes in Utica. The St. Thomas family will receive visitors in church, immediately following Richard’s Memorial Mass. Arrangements have been entrusted to the Adrean Funeral Service, Inc., Utica, NY.


Provide comfort for the family by planting a tree in memory of Richard St. Thomas, please visit our Heartfelt Sympathies Store.